No Candidate in CA27 is Worth Your Vote

I regret endorsing Mike Garcia. Corrupt and fake so-called conservatives like Mike Garcia deserve to lose. Over the past few years socialists and globalists have collectively destroyed the very foundations of our nation and every step of the way frauds like Mike Garcia, Liz Cheney, Mitt Romney and many local Republicans were all too happy to assist our enemies every step of the way. The very freedoms that for centuries separated us from petty dictators and collectivists have now been virtually all but rotted away and with it our historic standard of living. Liberties that led to American exceptionalism and later Pax Americana were tossed to the wayside during the needless covid lockdowns, inflationary spending bonanzas and the calculated destruction of our workforce as well as our public institutions. Again, during this short chaotic period Mike Garcia voted and supported this radical agenda to shake America to her very foundations.

In fact, Rep. Garcia authored the legislation that allows Big Pharma to use expired and experimental covid vaccines upon unwitting Americans at a time when he should have been fighting for freedom of choice. Rep. Garcia toted the Biden line of cutting away from Afghanistan by supporting streamlined SIV visas for VIP Afghans thus encouraging surrender months before the collapse when they should have been told to stand and fight. Rep. Garcia voted in support of handing Biden unlimited blank checks with no oversight to Ukraine despite that nation’s notorious reputation for political money laundering and unrivaled corruption. Rep. Garcia supported nearly half the socialist bailouts during covid that has led to the very inflation he railed against as a candidate just a few short years ago. From red flag gun laws and welfare for federal prisoners to ignoring local veterans and supporting surveillance against conservatives as well as amnesty- it is sad to say that Mike Garcia lied to us.

My voters will recognize and hopefully remember that since 2019 I was one of the few local activists to warn of the imminent disaster in Afghanistan, who championed vaccine choice before the pandemic and cautioned against the dangers of inflationary spending. I was laughed at initially but nobody is laughing now and as America continues to be steered into the abyss it is important that we do not continue to reward and thus entrench bad actors, frauds, fakes, traitors and socialist goons. Due to internet and media censorship I cannot elaborate further. Furthermore, Rep. Garia refused to debate me and even engaged in candidate suppression to ensure the previously mentioned facts and viewpoints were never heard by local voters. An un-American and unprecedented move for an incumbent. I hope that true patriots get this message and then act accordingly now that you know the truth.

With that said, Rep. Mike Garcia no longer has my endorsement nor support. Christy Smith obviously does not have my support either but given Rep. Garcia’s voting record there is truly no difference between the two on core conservative and Constitutional issues. Mike deserves to lose in order to clear the way for a true patriot and a fighter who will make a stand. 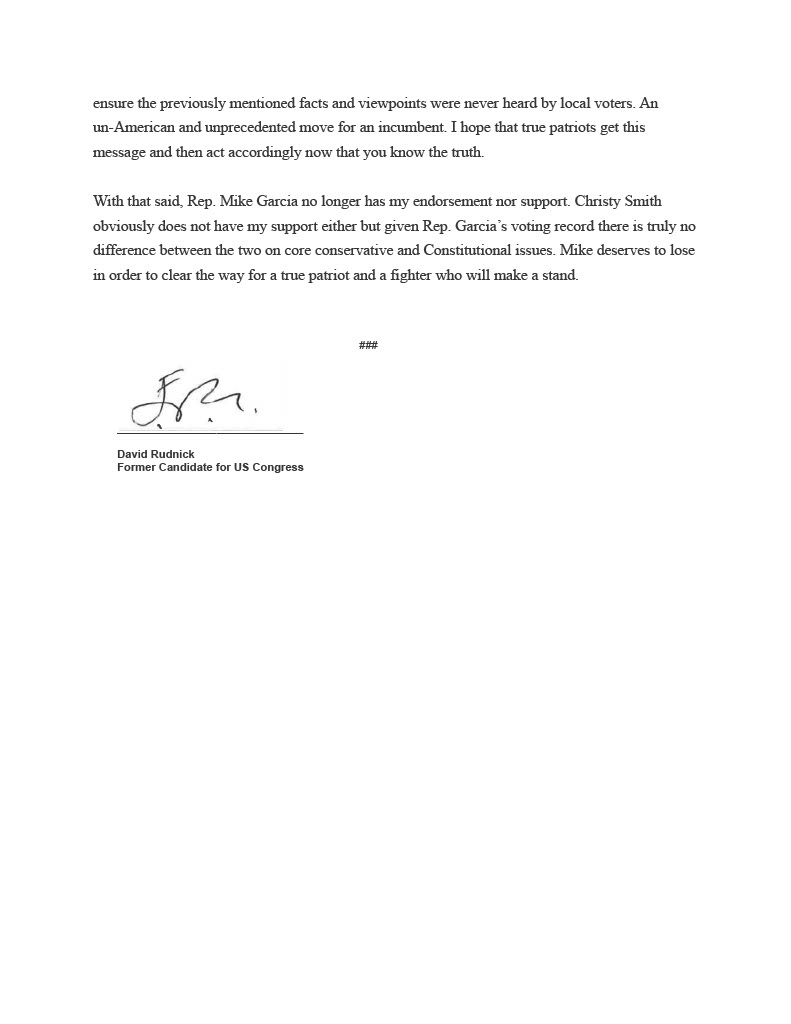