President Biden is an illegitimate President who has destroyed this nation's standard of living in only a few short years. On day one in Congress, I will file Articles of Impeachment against both Joe Biden and Kamala Harris for betrayal of public trust among many other charges. Enough is enough.

Rep. Garcia does not support impeachment and he refuses to hold this Administration accountable but I will. President Biden's radical agenda now has the potential to crash this nation's economy. I was on record multiple times in 2019 warning of the hyperinflation that is destroying the middle class today and I am again warning that the situation may get dire in the next 18 months if drastic actions are not taken. Biden's massive levels of debt spending coupled with his failed energy policies may very well hurt our potential to compete internationally for a generation or more.

I must also mention the intolerable situation that the name of Biden constantly puts the tiny nation of Israel under. For a second time in history, under the banner of the United States, the President is negotiating with terrorists in Iran. Nothing good will come from any sort of deal or arrangement with the Iranians. If filing impeachment articles against the President delays his agenda with Iran by even one day then we must consider that for just one more day we spared the nation of Israel from certain destruction. Iran has threatened to destroy Israel and Republicans must not sit idly by while Israel is used as a mere pawn just as the Czechs were used by Chamerberlain in 1938.

From Ukraine and China to Saudi Arabia and Russia the Biden family has extensive and lucrative contracts with notorious regimes all around the globe. Many of these scandalous arrangements often involve what Hunter Biden refers to as, "forever deals," with state-owned Chinese military firms that must be scrutinized for national security. I also have grave concerns over the family's contracts with the Ukrainian firm Burisma Holdings. The President previously threatened to withohold aid to Ukraine if a prosecutor did not cease investigating his son and these quid pro quo arrangements must also be thoroughly examined.

Chaos At The Border

The President has failed the American people on the Southern border and in every single way. The Biden administration's handling of the immigration crisis served as an international embarrassment particularly when he threw thousands of people under a bridge in addition to solely targeting Hatian immigrants for deportation (an old Dixiecrat policy). President Biden's decision to outright defy federal immigration laws and allow 2 million people to cross here is a direct afront of his obligation under Article Two of the Constitution to take care that our laws be faithfully executed.

I also have serious reservations regarding the President's health and his abilities to perform the rigid duties of the Presidency. We have all seen firsthand his struggles. He is often shielded from the press and slated time for questioning often ends abruptly with no warning. What few questions are asked are often answered angrily only adding to an already tense political environment. Joe Biden is not up to the task and he must be removed from office. 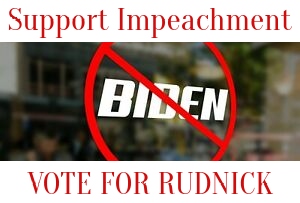